58% of all forces in England expect to reduce spending on policing illicit drugs according to a new UK Drug Policy Commission Survey.

As police forces across the UK are forced to tighten their purse-strings, common sense prevails in an analysis of how best to use the resources they have.

The survey suggests that:

• Many forces also face reductions in local partnership work, with 38% expecting to do less drugs works with community groups, and a third expect less work with local authorities. Officers expressed concern that this could lead to knock-on effects as gaps were created that some might expect the police to fill. A third of forces said they were going to reduce the drugs education work they do with schools.

• Just over a quarter also reported that their use of drug dogs would be curtailed.

What this means, in effect, is that the police will be solving murders, rapes, investigating gun-crime, sex-trafficking, and the many crimes that actually cohere with moral discrepancy. Prior to this the police had been using the surplus of resources at their disposal pretending to be Orwellian Thought Police who tell people what they can and cannot experience with their own minds.

The move may reflect that growing number of police officials who are taking a stand against prohibition. For information see ‘Law Enforcement Against Prohibition (LEAP) UK‘

Every hour spent enforcing drug-prohibition is an hour spent curtailing your cognitive liberty, every pound spent is a pound of the public’s own money being used to oppress themselves. 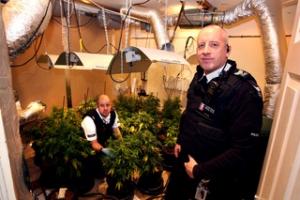