“We believe that drug prohibition is the true cause of much of the social and personal  damage that has historically been attributed to drug use. It is prohibition that makes these drugs so valuable –  while giving criminals a monopoly over their supply. Driven by the huge profits from this monopoly, criminal gangs bribe and kill each other, law enforcers, and children. Their trade is unregulated and they are, therefore, beyond our control.

History has shown that drug prohibition reduces neither use nor abuse. After a rapist is arrested, there are fewer rapes. After a drug dealer is arrested, however, neither the supply nor the demand for drugs is seriously changed. The arrest merely creates a job opening for an endless stream of drug entrepreneurs who will take huge risks for the sake of the enormous profits created by prohibition. Prohibition costs taxpayers tens of billions of dollars every year, yet 40 years and some 40 million arrests later, drugs are cheaper, more potent and far more widely used than at the beginning of this futile crusade.

We believe that by eliminating prohibition of all drugs for adults and establishing appropriate regulation and standards for distribution and use, law enforcement could  focus  more on crimes of violence, such as rape, aggravated assault, child abuse and murder, making our communities much safer. We believe that sending parents to prison for non-violent personal drug use destroys families. We believe that in a regulated and controlled environment, drugs will be safer for adult use and less accessible to our children. And we believe that by placing drug abuse in the hands of medical professionals instead of the criminal justice system, we will reduce rates of addiction and overdose deaths.”

Today Points welcomes Netherlander guest blogger Wim Best, PharmD. and registered toxicologist (ERT). He started his career in the pharmaceutical industry and has held positions both in Quality Assurance and Control and Regulatory Affairs. He now works for the Healthcare Inspectorate of the Dutch governmen, where he is responsible for controlled substances. Since 2009 he has been active as a forensic toxicologist dealing with crimes possibly committed under the influence of drugs or medicinal products, and since 2010 he has served as an honorary investigator at Maastricht University, Faculty of Psychology, Dept. of Psychopharmacology.

A hundred years after the first International Opium Convention in The Hague and the discovery of MDMA in Germany, Amsterdam hosted the Third Interdisciplinary Conference on Psychedelic Research organized by the OPEN Foundation. The conference lasted two days, during which speakers and public discussed research, experiences, new ideas and philosophical approaches. 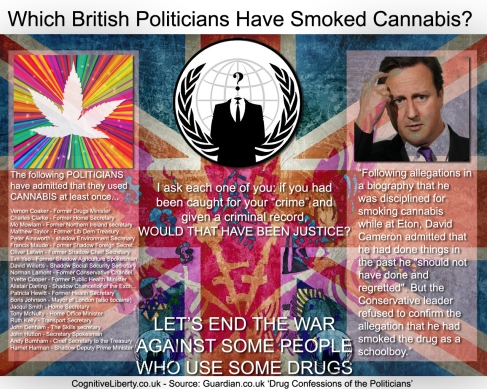 In the last few weeks we saw the parliamentary commission on drug policy come to a close. The commission concluded that a Royal Commission should be started to investigate the most sensible route forward on the matter: a more lengthy and rigorous public enquiry which would wield far greater power.

David Cameron was quick to dismiss the advice of the think-tank that had been dedicated to investigating the issue for the last year. This being a man who has (according to this BBC news article) used drugs in the past, who in 2002, when HE HIMSELF was a member of a  Parliamentary Commission on the same issue suggested that ecstasy should be down-graded from class A, and cannabis to class C, stating:

“Drugs policy in this country has been failing for decades. Drug abuse has increased massively, the number of drug-related deaths has risen substantially and drug-related crime accounts for up to half of all acquisitive crime. I hope that our report will encourage fresh thinking and a new approach. We need to get away from entrenched positions and try to reduce the harm that drugs do both to users and society at large.”

Here’s betting that Cameron, a decade or two from now, will join the long list of ex-prime-ministers, presidents and politicians who, only after they have lost their power, decide that that drugs should be decriminalised.

Of course, the new enquiry focussed on the same old issues: the dangers, the legal highs, drugs in prison. As with so many things though: the most interesting things are what weren’t said, what was ignored, and issues the commission chose not to linger with for too long.

It seems that a parliamentary commission can only go so deep, there are boundaries to work within and certain rules you have to stick by. In the case of this recent parliamentary commission the main boundary, the main rule, was the question of the fundamental legitimacy of drug prohibition. Really the purpose was to investigate drug policy whilst holding to a tacit assumption that recreational drugs must remain illegal.

The commission itself, as well as the inevitable tide of mediocre media analysis on the issue, failed to go to the real heart of the issue. The criminalisation of recreational drugs is a civil liberty issue, a ‘cognitive liberty’ issue: it is about no less than the state’s control over the minds and experiences of the population, over the freedom of the individual.

Nobody asks, nobody cares, about the question: “What gives those people the right to tell me what I can and cannot do with my own mind?”. People have used myriad means to alter consciousness for millennia, we have come to take it for granted that there should be ‘some one there to tell us what we aren’t free to do’.

Another ‘little thing’ about the issue didn’t really make it to the commission or the press. Whilst discussing all of the harms, the issue of the benefits of drugs didn’t seem to get quite so much attention. For some reason, discussing the statistically tenuous links between cannabis and schizophrenia (cannabis being a drug which has become more dangerous precisely because of its illegality) is infinitely more important than discussing the medicinal benefits of the drug. Likewise, calls for psychedelics to be integrated into the psychiatrists arsenal of controlled psychoactive medications, or at least for research into the medicinal benefits of the drugs to be allowed, weren’t given much time at the commission.

Then there’s the other great taboo, and this is the true elephant in the room: America. We all know that every time a British Prime Minister EVER speaks with a US President the words “special relationship” must be uttered at least once. Is drug prohibition, essentially, a diplomatic price we have to pay to maintain this “special relationship?”. We all know that if there’s one thing America doesn’t like, it’s for one of it’s submissive allies to start asserting too much autonomy.

If you look at the history of our drug policy, you will see that in every stage of its development it was following in the footsteps of America’s dug policy. If you look a little closer you’ll see America, every step of the way, holding the hands of British politicians and leading them into ‘the war on drugs’.

‘The war on drugs’ – a puritanical American moral crusade- the UN Convention is simply how America imposes it on the rest of the world. Imposing an unending war on the world, and in so doing, allowing its power and influence to permeate into the governments of all nations: it really is quite clever!

The truth is, fellow Brits: our government IS NOT IN A POSITION to back out of the war on drugs, they do not have the power to do it, they are not allowed. America wouldn’t like it, so it’s not going to happen: it’s a diplomatic thing more than anything else, it ‘might seem rude’ to our allies if we start thinking for ourselves. Drug prohibition is a poisonous policy: it needlessly sets the state against its citizenry. It is totalitarian, interfering with the personal choices of the individual, removing freedoms long-enjoyed by our predecessors.

Now that a couple of US states have decriminalised cannabis for recreational use, a double-standard is starting to exist: with all these things there comes to be a tipping point. Once enough countries or states legalise it, we think the other countries will be forced to do the same for reasons of sheer economics.

Stanislav Grof (born July 1, 1931 in Prague, Czechoslovakia) is a psychiatrist, one of the founders of the field of transpersonal psychology and a pioneering researcher into the use of non-ordinary states of consciousness for purposes of exploring, healing, and obtaining growth and insights into the human psyche. (WIKI)