This article compares charts that display the relative harms of drugs, some of which are banned, some of which are legal. These charts come from different sources in the scientific community, they seem to present coherent findings. The implications of these findings on the psychedelic class of drugs will then be discussed. 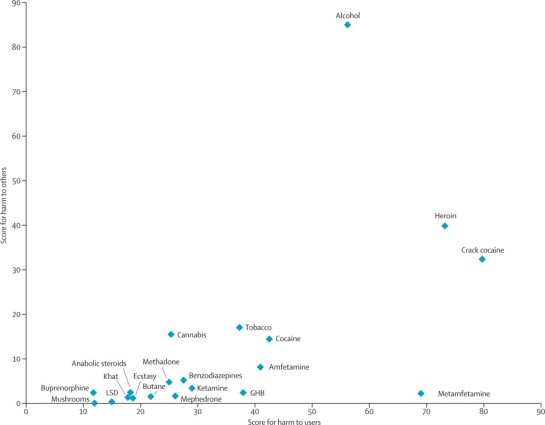 Source: The Advisory Council on the Misuse of Drugs (ACMD)

Aspects like crime, economic cost, international damage and loss of relationships are based on the current legal status in Britain, not the potential under legalization or decriminalization.

In a society that conditions people to believe that there is a high risk of having bad experiences when they use psychedelics, the chance of that occurring, and subsequent psychological damage occurring, is increased. This can be viewed as a form of the nocebo effect.

Drug harm charts do not take into account the benefits that result from the use of some drugs.