The Psychedelic Community as a New Religious Movement:

The word psychedelic was coined by Humphry Osmond in 1957, its etymological root is meant to indicate the ‘spirit-revealing’ or ‘soul-manifesting’ nature of the chemicals concerned.

We know, beyond all doubt, that many of the users of psychedelic drugs such as LSD, DMT, Mescaline and Magic Mushrooms claim that these chemicals cause them to have experiences they describe as spiritually significant: usually in terms of allowing new spiritual insights about the nature of their being and its relationship to experience and the world, or in terms of some kind of spiritual healing effect.

Many, if not most, individuals who repeatedly use psychedelics do so with a primary motivation to explore the spiritual benefits of psychedelics: it is therefore, a part of their spiritual lives. Many of those individuals feel that the drugs themselves are sacred gifts, they use drugs like LSD to bring about experiences and states of being that are somehow “spiritual”,  “mystical” and “divine”.

Is it not conceivable that this community of individuals, who use the same sacraments, share similar spiritual motivations, and hold similar core beliefs represent a new religious or spiritual movement?

It is, essentially, a ‘New Religious Movement’ (NRM) that is not allowed to become an organised religion. It cannot be given a name, nor can its places of communal gathering be made to explicit. It includes a great variety of belief and practice: but then the religions of Hinduism and Buddhism, even Christianity all show a great variety of forms and expressions also. It has it’s own set of texts, but none are adopted as dogma, there is no cannon: but then many of the historical forms of human spirituality did not have a cannon either. It even has its own unique forms of artistic expression and aesthetic style, rife with themes of transcendence and spiritual discovery.

In Europe, especially in the summer, there are certain festivals attended primarily by the psychedelic community. At these festivals, an obvious form of neo-shamanism manifests itself: complete with music, dancing, and mind-altering chemicals, components of many shamanic traditions from all over the world. In fact, these festivals are becoming increasingly popular all over the world.

One of the implications of the continued growth of psychedelic festival culture is that the community of psychedelic users is becoming, with the help of the internet, more organised and more cohesive. Furthermore, now this ‘spiritual movement’ has community meeting spaces, with their own rituals, traditions, codes and conventions. At these gatherings there is a very strong sense of this community – people care for one another and help one another to have an enjoyable time, there is a sense of shared purpose and unity that is enjoyed by many when the psychedelic community meet.

Some might say “this isn’t spirituality, it is just hedonism’. Verily there are some who attend psychedelic festivals ‘just to have fun’, but there are others who feel, nonetheless, that psychedelic chemicals are an important aspect of their spiritual lives. Furthermore, who is to say that spirituality cannot be fun? Mystical texts from all world religions, including the bible, speak of ecstatic and joyous experiences that are encountered on the spiritual path: the Old Testament even describes singing and dancing as a result of spiritual attainment. 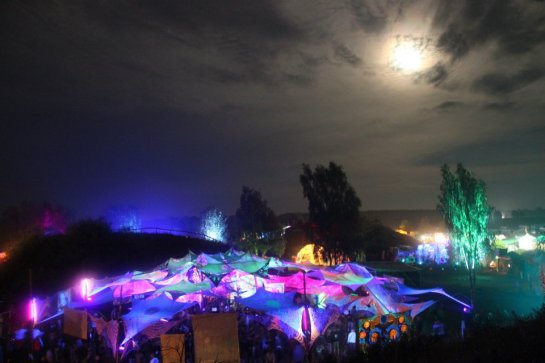 The Psychedelic Community has its own Places of Worship

When I walk down the street of Oxford on a Saturday night I see fighting, I see people throwing up, I hear glass smashing: people become rude, inconsiderate, violent. I have never seen a fight at a psychedelic music festival, I don’t see people stumbling around and throwing up, what I do see is people having the time of their lives and forming lasting bonds with people in the process.

Returning to the issue though, the psychedelic community needs to consider how it can go about becoming recognised for the legitimate spiritual movement that it is so that it can enjoy the same acceptance and according protections that are afforded to other religious communities.

In the mean time, psychedelic spiritualists will continue to be a persecuted and oppressed minority religious group. For walking their spiritual path, they face imprisonment, with all the hardships and consequences-on-life that are entailed by it. Let’s have a brief look at how this persecution came about.

Christian Puritanism & Moral Panics: ‘The War on Drugs’ as Hysteria

We must recognise that for the last thousand years (and then some) the population of Europe has had its native religious/spiritual practices oppressed by the ‘dominator religion’ that is Christianity. Wherever Christianity went it systematically destroyed any competing forms of spirituality: often through violence. In the background, that force is still an undercurrent of our society.

Think about it. The American political system is still so obviously fixated on the values of Puritanical Christianity: that kind of ‘good christian wholesomeness’ that is expected of any presidential candidate, the obsession with ‘sexual misconduct’ on the part those in the public sphere, and wariness of the many other things deemed viceful within the puritanical Christian tradition. Is it a coincidence that this moral panic, this ‘war on drugs’, has come from a country whose dominant spiritual power is a form Christian puritanism?

Like the witch-trials, the ‘War on Drugs’ is another hysterical moral panic: something is judged as evil, all ‘the good people’ respond with unspeakable inhumanity.

A moral panic, and not the first. Can we think of some other examples from history where the Christian majority have deemed something to be ‘evil’ or ‘morally wrong’ and responded with unspeakable violence? The witch-hunts, for example, which also took on a distinctive ferocity midst the North American puritans. The Inquisition, a few hundred years of torture, persecution, inhumanity: based on a response to what is perceived to be an evil.

Perhaps you think the comparison extreme? It’s not like we’re burning people at the stake or torturing them, right? But we do lock people up: vast swathes of people (usually the most socially disadvantaged) all in response to the supposed ‘evil’ of drug-use. As in the inquisition, we interrogate people, we use fear and intimidation to make them betrays other human beings: is it not torture to go through a judicial system and be locked away for decades of your life?

The ‘War on Drugs’ is just another inquisition. The ‘Holy/Good people’ exercising hegemonic domination over ‘the evil people’, and in the process performing unspeakable evils themselves.

Is it not an evil thing to do this to an individual? It is a harmful action after all, to lock them in a prison for years on end. Is the act of imprisoning some one for using psychedelics not, in fact, more evil than that individuals ‘offence’ of using psychedelics?

When an activity carries risks only to oneself, does that make it unethical? If so, are horse-riding and mountain climbing unethical to? Clearly then the idea that drug use is morally wrong cannot be based on the risks associated with their use. If it is not a moral wrong, then to punish people for it is not just, and is unethical.

It is interesting to consider the extent to which Puritanical Christianity has been embraced by, what some might consider to be ‘the new dominator religion’, Capitalism; and the extent to which spiritual movements which are perceived to be a threat to capitalism are marginalised, and in this case, forbidden.

The psychedelic community, as it stands, is a new religious/spiritual movement. Its members are subject to persecution and oppression, as they have been for the last fifty years.

Much of modern drug culture is simply an extension of much older spiritual traditions. Modern Britain has new sacraments now, and its tribal dances are to dubstep from massive sound-systems

This ‘war on drugs’ is just a part of a millenia-old pattern of ‘organised religion’ dominating more spontaneous & experiential forms of spirituality. It manifests the values of the puritanical religious fanaticism which has come to dominate American political culture.

If our Right to Religious & Spiritual Freedom is to mean anything, then it must accommodate entheogenic  and psychedelic compounds , which are an important component to many forms of spirituality.

One source of hope is the increasing unity of the psychedelic community around the world.